Sometimes between last week and this week, we crossed a threshold: Two millions MVVM Light downloads.

I don’t have many metrics about MVVM Light, because the toolkit itself is not instrumented in any way. You get the raw binaries without added sugar :) So the only numbers I can rely on are the number of downloaded copies, either on Nuget or as the VSIX extension for Visual Studio. Obviously this doesn’t say much about the number of applications created with MVVM Light, since once the VSIX is downloaded, every File / New Project command creates a new app without any download. Still, it’s been interesting to see the evolution in downloads since I started to track the numbers.

Recently, I had a memory on my Facebook wall reminding me that 2 years ago, I was posting about 500’000 downloads, just before my Visual Studio Live sessions in Las Vegas. Two years later I was in Vegas again, for VS Live again, and about to cross two millions. Clearly the curve went up quite a bit. I tried to analyze what was the most significant change, and I think the port to Xamarin definitely played a significant role there. I also saw an uptake in interest in conference submissions since MVVM Light is truly cross platform, especially since Xamarin Evolve 2014 where I had a session. Since then a lot more sessions were given about Building Truly Universal Applications with MVVM Light, and quite a few full rooms too.

As I mentioned, it is difficult to track downloads in a significant manner. There are automated build stations that will restore Nuget packages every so often. On the other hand there are people who download the Visual Studio extension once and create new applications without downloading anything. The only significant metric, I guess, is the evolution in downloads over time. Here is a chart (click to enlarge): 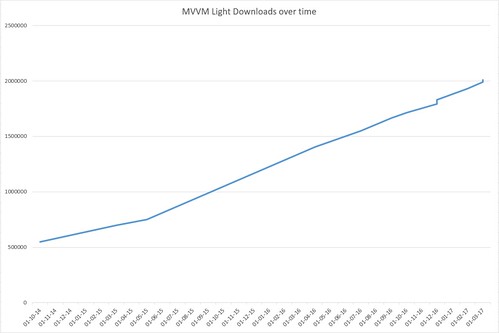 Right now I track downloads on the following pages:

Currently I am working on the following topics:

And of course the backlog is still active! Don’t hesitate to send your feedback :)