A world of devices – Upcoming talk

In September, I will give a special session in Amsterdam, at an event titled LevelUp Mobile. My talk is titled “A World of Devices”. Here is the abstract:

How do you feel when you forget your phone? If, like Laurent, you feel lost, you are probably also living in a world where devices are augmenting you and making you more connected, more efficient and more skilled (or is it addicted?). In this session, Laurent Bugnion, geek, developer and gadget addict will show you next generation devices and the collaboration between
them. From smartphones to smartwatches, from IOT and phablets to XBOX and Surface Hub, from Cortana to HoloLens, we live in a world of devices where software is coming out of the computer more and more. We’ll take a quick look at the past, a good look at the present and a glance at the future with lots of demos.

This talk is based on thoughts that I have had in my mind for many years already: Our devices, even the so-called smartphone (which, let’s face it, is not a phone but rather a pocket-sized computer with which you can, if you have to, place calls over the phone network) are augmenting us with superhuman abilities. How else could we know, with a precision of a meter or less, where we are positioned geographically? How else could we have access, from almost anywhere in the world (OK, that’s an exaggeration, but it is close enough for most of the civilized world) to a very significant portion of human knowledge? How else could we have access, anywhere and at any time, not only to enough movies, music and books to educate and entertain us multiple lifetimes. How else could we keep in touch 24/7 with our families and friends all over the world?

The smart device we have in the pocket is effectively turning us into cyborgs. Augmented humans. And this is only the beginning. 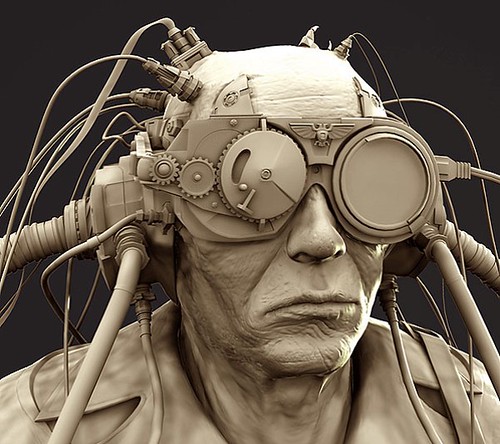 These days, we witness an incredible number of new devices, with new form factors. Maybe the most intriguing ones are the ones placed in the “wearable” category. The most common are smartwatches (which, like the smartphones, are much more than “just” watches). In their lowliest form, they need a connection to a smart device to be effective. But many are doing more than that. For instance the Microsoft Band 2 has a built in GPS and so it can record a run even without the help of a connected device. It also has a wealth of sensors that can be used to build mobile applications: Pressure sensor (so you can use it as a barometer / altimeter), heart rate, pedometer, distance, stairs, accelerometer and gyroscope (so you can use it to control 3D scenes or even physical objects), and even a UV-meter to tell you when you should put on solar cream.

We also saw the appearance, and then the quasi-disappearance, of connected glasses made by Google. It was certainly an interesting sociological experiment. Very soon we witnessed a lot of resistance in the population. Many felt aggressed, violated by the glass wearers (who were often referred to as “glassholes”). They felt that the wearers were displaying arrogance, and invading their private life, possibly recording video or taking pictures. The fact that the device had a low battery life and a low resolution was not playing a role in this concern. Neither was the fact that our lives are already recorded all the time, either by so-called security cameras, or by the constant picture-taking that everyone is doing these days. For some reason, the Google glasses were different and were perturbing the peace much more than any other device. This is (partially, to be completely fair) why they failed to gain traction, and why you don’t see them anymore these days. There are no doubts in my mind that more such devices will appear on the marketplace at some point in the future, although probably in a different form factor, less conspicuous and closer to normal glasses. There are already amazing devices available such as this model which allows an app to inform a person with impaired vision about what is happening around him/her. See Shaqib Shaikh’s great video shown at Microsoft Build this year!

This brings us, of course, to augmented and virtual reality. Even though these are not new domains, we are seeing this year a lot of interest and new devices. Oculus Rift is releasing its second iteration, HTC is selling its Vive device which is pretty great. Even on the low end of the marketplace we see devices like the Samsung Gear which takes advantage of smart devices and turns them into a poor man’s VR headset. And on the AR front we have of course Microsoft HoloLens, released to developers, an incredible device that not only places holograms in your everyday world, but also interacts with the real world and allows, for example, virtual objects to bounce off the real tables and the real walls, and for virtual characters to sit in real chairs.

And the most beautiful is when all these devices, from small to large, interact together and create a connected, augmented environment. This is the promise of Windows 10 and its universal applications, of cross-platform computing which has never been so promising, of wireless protocols that connect devices in very short or very large range, and allows them to collaborate.

At the LevelUp event, I will be talking about these concepts but also demonstrating some of the futuristic features that are already available to developers and to the public. I am really looking forward to have the occasion to share these thoughts with the audience, and demo how far we came with devices and their interactions.

Comments for A world of devices &#8211; Upcoming talk