In Android development, what XAML coders call “code behind” is stored in a class deriving from Activity. This is where you will handle the UI events, prepare the view, etc. Just like in XAML, the code you put there is less testable and less shareable but for view code, this is the place to do it. Of course if you use MVVM Light (or another MVVM approach), you reduce the amount of view code and some of the issues go away.

When you come from XAML, you notice how pampered we are by Microsoft. For example, if I add a UI element in the XAML and give it a name as shown below, the IDE will automatically generate a field in the code behind, so that I can interact with this element, for example by handling some events. This is super convenient. Of course if you don’t give a name to the element, no field is generated, and you cannot interact with the element (which is OK for most of the elements on the UI). You might wonder where the field gets generated, in fact it is hidden. To find it, you will need to dig a little.

To see the generated code, you need to click on the “Show All Files” button in the Solution Explorer. Then you can dive into the obj/Debug folder. 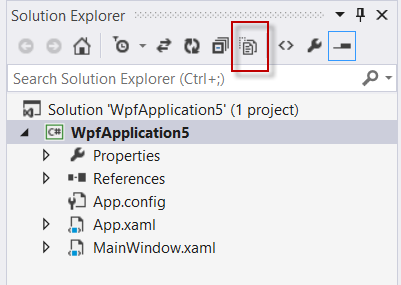 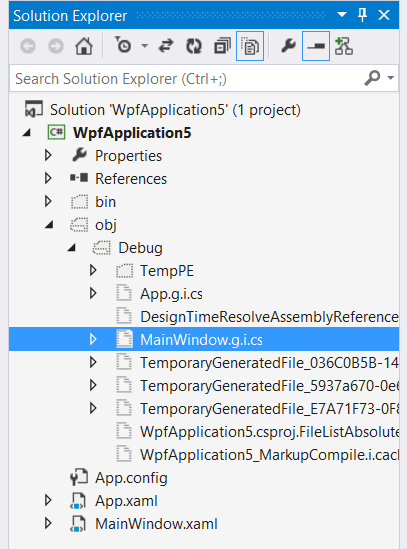 If you open this file, you will see some code looking like this:

Here you can see how the application is parsing the XAML and assigning an internal field for the MyTextBlock element. Most of the time, you don’t have to know about this, it is just available to you in the code behind.

In Android, the markup language is called AXML. It is quite similar to XAML with enough differences to make it interesting ;) One of the main annoyance however is that named elements do not get a field in the “code behind” (the Activity). You need to add it manually. For example, the following AXML requires the following code in the MainActivity to access the MyTextView element:

Getting access to the element defined by the ID

Ideally it would be nice if Xamarin was creating this code automatically when the AXML file is modified, just like the XAML tools are doing on the Windows side.

Since this is not the case however, MVVM Light is offering a code snippet to make things less annoying to write. After installing Version 5, you can follow these steps:

This code attempts to get the MyTextView element on demand and caches it to avoid the expensive interaction with the AXML parser. Having this annoying code stored as a code snippet in Visual Studio is a good step because it allows you to write less code. There is one more thing I like to do though:

Here too, I draw from my experience in XAML. As we saw about, the generated code allowing access to named elements is placed in a partial class: Every code-behind file (MainWindows.xaml.cs for WPF, MainPage.xaml.cs for Windows Phone and Windows Store, etc) hosts a partial class. The other partial is located in the obj\Debug folder as shown above.

For my personal preference, the Android code getting access to an IDed element is something that should be hidden somehow. It is typical scaffolding code, and I like to store this code in a partial class that I rarely open. Just like in XAML the “hidden” partial class’ file is named MainWindow.g.i.cs, I also use a specific extension in Android and store my scaffolding code in a file named MainActivity.ui.cs.

In addition to having a partial class for the plumbing code, I like to nest my MainActivity.ui.cs file within the MainActivity.cs file in the Solution Explorer. This is highly unnecessary and won’t bring any advantage in terms of performance or building your code, but it is just neater, and I am a neat guy.

Right now the process of nesting the files is manual, there is (as far as I know) no tool or menu allowing you to do that easily in the Solution Explorer directly. In a near future, I am hoping to release some project and item templates for Android which will make this process easier by providing “pre-wired” Activity templates. For now, you need to follow the manual steps below: 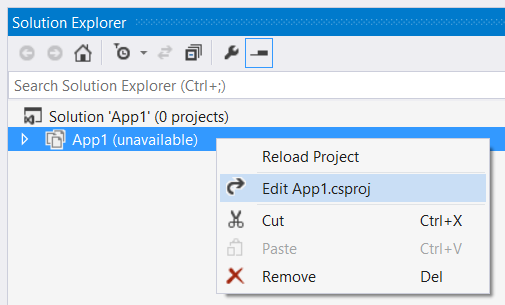 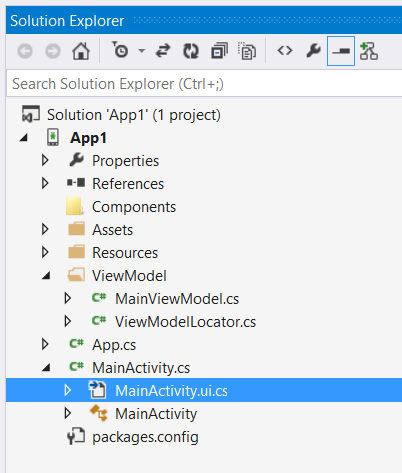 “Scaffolding” code in the nested MainActivity.ui.cs

In this article, I showed how I like to structure my Android applications’ views and isolate scaffolding code from the main code in which I define my bindings and my event handlers. I also showed how the MVVM Light “mvvmdroidelement” code snippet makes creating the scaffolding code easier, something that we have to do but don’t want to spend any unnecessary time on.

Finally, we talked about future plans to have MVVM Light project and item templates in Visual Studio to make these tasks easier. I hope that you are excited about cleaning your Xamarin code with these tips and tricks :)

Responses to “Structuring your Android activities”

Comments for Structuring your Android activities