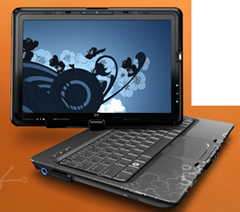 This morning, something weird happened on my new HP Touchsmart TX2 (a multitouch tablet PC). The keyboard just stopped working, including all the buttons around it (such as the volume up, volume mute and volume down buttons). The keys simply didn’t react anymore.

To solve the issue, I tried rebooting, and this is when I noticed that the keyboard also didn’t work in the BIOS. For example, I was unable to display the boot menu by pressing the “ESC” key anymore.

I then connected an external USB keyboard, and it worked just fine. This really sounded like a hardware failure.

Since the device is of course still under warranty, I called HP tech support. I chose the French language option, meaning I was talking to a French technician. I have to say, I was impressed by the quality of the support.

First, I was directed to a guy responsible for the desktop Touchsmart PCs, who couldn’t help me (bad start) but promised me another technician would call me in “a few minutes”. I thought “yeah right”, but what do you know, 15 minutes later they actually called.

The cure was the following:

This part is not very funny, because the power on button is actually a sliding button, and it is quite painful to press it for 3 minutes (aka eternity).

After these steps, the keyboard was back. I assume that it is a kind of reset, and that pressing the power button was to make sure that all the condensers were actually empty. Anyway, it worked, and it saved myself the painful step of sending my laptop back to HP!

Comments for HP Touchsmart TX2 keyboard failure (and the cure)