Oh man what a trip.

First I left home at 6:30AM, which on a Sunday (and my birthday) is pretty more a crime against humanity. Additionally, I was woken up a few times during the night: Twice by my elder daughter who came to check if my bags were still there, because she was afraid to miss me to wish me happy birthday in the morning (she opened her door at 2:30AM and 4:30AM, both times waking me up of course :)

Then after taking the train to the airport, I learned that my flight to Frankfurt (there are unfortunately no direct flights from Zurich to Seattle) was delayed for technical reasons. It was a problem because I only had about 1.5 hours in Frankfurt to change plane. Only when we reached Frankfurt did we learn that they hadn’t rebooked us automatically (even though they told us they did in Zurich), so the hunt for a flight started… I got to say, overall (and though I have a lot of understanding for technical issues being both an engineer and a former pilot) I was rather disappointed by Lufthansa as a company. The information flow was really not good from Frankfurt to Zurich. Swiss would definitely have handled that much better. That said, the employees did their best to help us and went out of their way sometimes to make the experience not too painful.

So anyway. The only options were:

Since I absolutely refused to lose day 1 of the Summit, the only viable alterative was to fly to Vancouver. They put me on waitlist from Vancouver to Seattle, but I decided to find something else on location, because I didn’t want to arrive too late in Seattle (not even mentioning that I was not sure to get my seat on the Air Canada plane).

The flight to Vancouver went well, though of course I didn’t get my preferred seat (I like to have space for my laptop (and my legs) so I usually take a seat near an exit row or in front of the plane. I had that seat booked on the Seattle plane, but I had to take what was left on the Vancouver plane… So instead of working, I just decided to chill out and watch movies. Not a bad choice after all. I saw National Treasure, the Rocky Horror Picture Show (love that movie) and a german speaking comedy about men and women, really funny and sexy.

In Vancouver, I went to hunt for an earlier flight but was unable to find any. I also tried the coach (2.5 hours drive down to Seattle) but the next one was leaving too late. So instead, I decided what the heck, and I rented a car. It was a good choice: The weather in Canada was great, not too many people on the road and the drive is very scenic. It took me a little under 30 minutes to cross the border, and the personal was really friendly.

I eventually reached the hotel (Grand Hyatt Seattle) at 7PM, which definitely beat any other option I could have chosen. Dropped the car in the hotel (the downtown Avis return place was closed already), took a shower (oh my god the pleasure) and then took a cab to Jillian’s, a bar and billiard place where the Palermo party for MVPs was taking place. I have to admit I didn’t stay long, but I had a couple of beers and some hot wings (yum) and had the great pleasure of meeting and chatting with Shawn Wildermuth, Tim Heuer, Karl Shifflett, Keith Helder, Sam Gentile and of course Jeff Julian and John Alexander of GeeksWithBlogs. They had prepared a great gift: A T-shirt with the GeeksWithBlogs logo on front, and the URL to my blog on the back. It’s a great thought guys, thank you so much!! 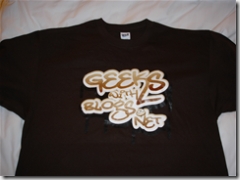 So today is day 1 of the Summit! I woke up at 4:30AM (not bad, 6.5 hours sleep!!). Later I will go down for breakfast, then go to register for the summit and finally go and return my car to the Avis place downtown. Then the Summit will start and I am really looking forward. I am sure that the day will bring a lot of good times!