It’s hard to believe, but it’s true, it has been already one week since I came back from MIX. During this week, I have been so busy with the project that I didn’t even have time to blog.
In the project we are currently developing, one of my roles is to be WPF integrator. This is a new role that has been discussed already quite a lot in various occasions. The WPF integrator stands between the designers and the developers. His role is to coordinate the work between these two very different worlds, and to try to get everyone understand each other. Honestly, there is more to this role than just that, but so far it’s been pretty much the major challenge :)
Designers in the traditional UI world are used to design screens, to count pixels and to produce amazing look&feels that the developers will later mess up in the implementation. WPF introduces a very new way of designing, because designers now have the chance to work on real code, on what we call XAML assets, or “pieces of codes” that the integrator uses as is in the application.
People like Scott Guthrie, Robby Ingebretsen, Nathan Dunlap and many others spent a lot of time thinking and talking about the new designer-developer workflow. A lot of things have been told about that at MIX. Check the sessions for more info.

After a few weeks spent in this role, I believe that there are various ways to do WPF. In our current configuration, we have quite a few teams of developers (though in the moment only 3 of them are actually developing WPF, this number will grow soon), and one team of designers. The various challenges I face are:
I want to moderate a little that last statement: We are talking about roles here. In smaller projects, the same person can very well have both roles of designer and developer. In that configuration, an integrator is not needed :) So it’s actually still useful for developers to learn and understand XAML!

One thing I discovered this week is the difficulty to keep a complex application blendable.
(By this we mean: Keeping an application’s code so that the project can be opened and reworked in Expression Blend).
Let’s be clear: For the moment our application is not blendable. I can see pieces of it in Blend, but not enough to actually allow the designers to work on it. I think it’s a problem that we should work on. We have a few issues here:
I don’t lose hope totally that we’ll be able to have a blendable application some day, but for the moment, I need another way to work with the designers. The solution we currently use is have the designers (or the integrator) work on templates (data template, control template).
For example, my designers created quite a complex background for one of our windows. This background is very elaborate. It has a linear gradient brush as its basis, then a shadow, and then a highlight. It looks great, but how to do a brush with all that? (WPF controls backgrounds are an instance of Brush, for example DrawingBrush, LinearGradientBrush, etc…).
To solve that issue, I created a control template for a Border, which is actually made of 3 rectangles on top of each other. Since WPF supports transparency natively, it’s easy to reproduce the layering used in Expression Design by simply superposing the 3 rectangles. Using template binding, you can set each rectangle’s width and height to be the same as the Border they will represent.
Then, in the actual user control, I place a Border under all other controls, and I set the Border’s template to be the resource created before (the one with the 3 rectangles).
Pavan Podila described pretty much that very same way of working in a recent blog entry. The only difference is that in my case, I don’t use a ContentPresenter on the template I create, but I simply place the “background panel” under all the others. This is possible because we use a Grid as our layout root, and Grid supports z-index.

Last week we just delivered an important baseline, and it looks quite good. I am a bit unsure about changes that need to be made to it to ensure maintainability and easier changes to the design, but I believe that we have a good basis to build on. In the next weeks, I want to institutionalize the use of templates for our assets (this is a minor refactoring of the application, just moving a few lines of XAML code around), and would like to have the designers work on that code too. We will also continue to integrate assets (icons, logos) as we receive them.
This post was imported from my old blog. Original comments screenshot: 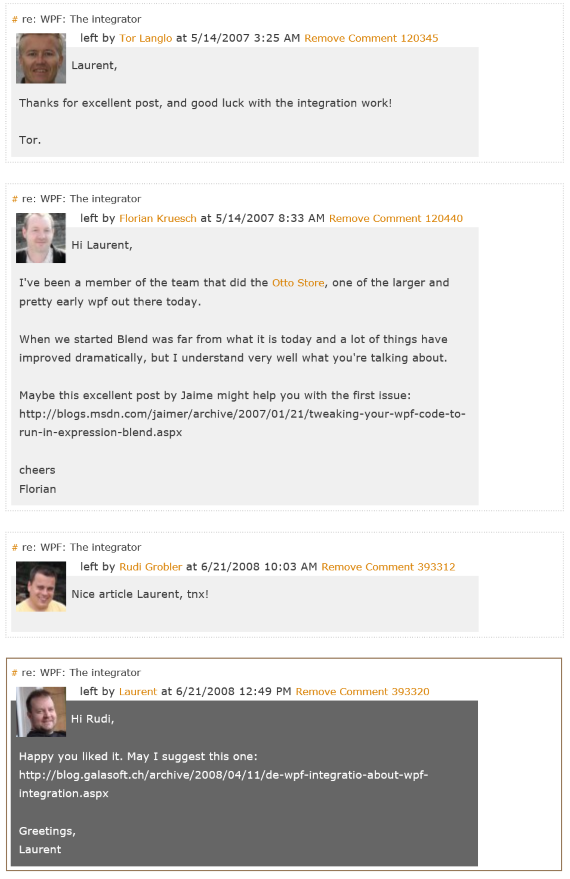 Comments for WPF: The integrator