.NET, ASP.NET, JavaScript, Technical stuff
See comments
A few years ago, I translated Douglas Crockford’s JsMin from C to C#, because we wanted to use this functionality in our build process. JsMin is a code minimizer for JavaScript. It will remove all comments, empty lines, turn tabs into single spaces, etc… The goal is to reduce the size of JavaScript files to the minimum necessary, without modifying the functionality.
Additionally to reducing the script’s size, JsMin also makes it more difficult to read, however it is not an obfuscator. Objects, variables, methods names are not modified. While such a functionality wouldn’t be very difficult to add, we believe that it is pointless to obfuscate JavaScript files.
Note: This is a direct translation from C (procedural) to C#. I didn’t refactor the object too much, so the design is far from perfect, but it works well.
Note 2: I just found out that Douglas translated JsMin from C to C# too, his version is available here, so pick the one you prefer ;)
Live demo
This page has a form allowing the user to send a JavaScript file to the web server. The file will be minimized and returned to the user.

JsMin has only a default constructor, but it also has a few public properties used to set options:
The C# version of JsMin provided here offers 3 public methods to minimize JavaScript files:

Receiving, minimizing and sending a script file in ASP.NET

This post was imported from my old blog. Original comments screenshot: 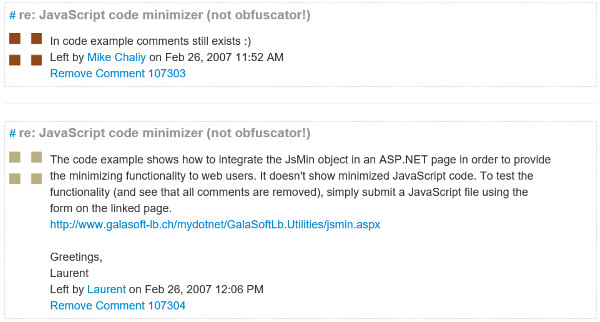